Thomas Rogers Brown was born on the 8 October 1844 to Peter Brown and Ann Roger (FR2034) the daughter of Alexander Roger and Christiana Wilson in the Parish of Errol, County of Perth, Scotland (GROS 351/00700227)

The 1861 census has Thomas staying with his Grandfather Alex Rogers at Glendoick Farm House in the Parish of Errol. He is 17 years old and his occupation is listed as Joiner. Also staying with Alex Rogers at the time is his wife Christiana and another grandson James Rogers aged 10 and listed as a Scholar.  At this stage we do not know who’s child he was.

Thomas married again on the 11 January 1870 to Catherine Rogers

Thomas, Catherine, and the four children emigrated to South Africa in 1874.

The 1878 Voter’s List for the Western and Eastern cape records Thomas as living at Lovedale. His voters number was 18. The Electoral District being Victoria East and the Cornetcy Alice.

At some point Thomas went farming and we read in his sons obituary that he died on the farm and the family then moved to King WilliamsTown which is inland of East London also in the Eastern Cape. However Thomas’ Death Notice shows that his usual place of residence was West Bank, King Williamstown. He died on the 8th November 1901. 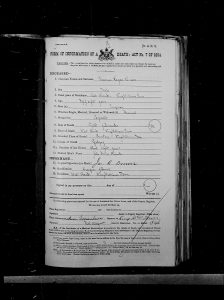 Latest research has revealed his Tombstone in the graveyard in King WilliamsTown. There appear to be differences in the date of births, but this could be a result of working ‘backwards’ from the date of death. 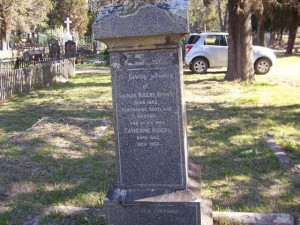 Information on the Parish Church of Errol

The parish church of Errol, which belonged anciently to the Abbey of Cupar, was dedicated by Bishop de Bernham in 1243 and in 1628 the old parishes of Errol and of Inchmartin were united together. In 1938, following the union of the Church of Scotland and the United Free Church in 1929, the Parish church of Errol (also known as Errol North) was joined with the former United Free Church congregation of Errol South. After the union the former parish church continued in use as the place of worship and the former South church was converted for use as the church hall. Errol later established a link in 1980 with Kilspindie and Rait with Kinfauns. The kirk session sits within the Presbytery of Perth.